When Looking Back Propels You Forward

I haven't written for awhile because I've been quite busy with my responsibilities in heading up Redeemer Christian Foundation, Inc.  Most things we read, including the Bible, urge us to forget what is/was in the past and press on toward the goal that lies ahead.  This is wise and sage advice.  Ruminating over past mistakes helps no one and only furthers the enemy's purpose.

I've been thinking, lately, about when looking back can actually be good for us.

I grew up in a staunch Presbyterian church.  We sang hymns that dated back centuries.  One such hymn I remember is, "Come, Thou Fount of Every Blessing" written by Robert Robinson in 1758.  I kind of got the fist verse, but the second verse was a complete mystery to me.

It begins with, "Here I raise my Ebenezer...".  My thoughts at the time were what was a character from a Dickens novel doing in a church hymn?  Never thought too much more about it until I was in a Bible study and it talked about 1 Samuel 7.  In it, the prophet Samuel and the Israelites found themselves under attack by the Philistines.  Fearing for their lives, the Israelites begged Samuel the prophet to pray for them in their impending battle against this enemy.

Samuel offered a sacrifice to God and prayed for His protection.  God listened to Samuel, causing the Philistines to lose the battle and retreat back to their own territory.  After the Israelite victory, the Bible records: "Then Samuel took a stone and set it up between Mizpah and Shen, and called its name Ebenezer, saying, 'Thus far the Lord has helped us.'" (1 Samuel 7:12)

The word Ebenezer comes from the Hebrew words 'Eben ha-ezer, which simply means "stone of help".  An Ebenezer, then, is simply a monumental stone set up to signify the great help that God granted the one raising the stone.

I have found that when I have fear or trepidation about going forward, it does me good to look backward and count my Ebenezers - the monuments that acknowledge God's bountiful blessings and help in my life.

For example...after my daughter was born, I had terrible post-partum depression.  Everyone, including the doctor, said it would pass.  It didn't.  Over the next couple years it grew worse.  The insidious ruminating and obsessing over things and the anxiety that accompanied it were excruciating.  There were times that I pondered if I could keep going on like this?  I remember vividly one day - sobbing hysterically in my bed - begging God to help me...to save me.  There were few words...just the Holy Spirit interceding with groans on my behalf.

As a last ditch attempt, I went to see a new Christian counselor and physician duo who finally diagnosed OCD (anxiety disorder) and depression (which often accompanies anxiety).  It was not that long after I was on the medication, that the dark, gray veil began to lift from my eyes.  God lifted me out of the slimy pit that I was in and He gave me a firm place to stand.  He put a new song in my heart (Psalm 40).

The Lord heard me and He helped me, so here I raised my Ebenezer.

The Lord brought me through subsequent bouts with the OCD...each time I thanked Him and raised an Ebenezer.  He never left me stuck.  He was faithful to bring me through the valleys.

I faced the scare of the big "C" and all the testing and waiting and treatment that goes with it.

The Lord was faithful so I raised yet another Ebenezer.

Through multiple surgeries with long recuperations.  Through a difficult marriage and a long drawn out divorce...the Lord stayed close.  The battles were not easy and the enemy did his best to derail me, but the Lord prevailed.  He helped me.  He brought me through. He was faithful to His promises.

So when I stand frightened or overwhelmed or doubtful about what lies before me...I look backward...

There on the horizon I see one monument after another after another of God's faithfulness to me.  I stand here now because He saw me through.  He was my stone of help - my Ebenezer.

This exercise in looking back, gives me the confidence to go forward.

Through each trial, God was growing and refining my character and in doing so He gave me the gift of HOPE!

"I boast in the hope of the glory of God.  Not only so, but I glory in my sufferings, because I know that suffering produces perseverance; perseverance, character; and character hope.  And hope does not disappoint, because God's love has been poured out in my heart through the Holy Spirit, who has been given to me."  (personalization of Romans 5: 2-5)

What hinders you from going forward with confidence?  What Ebenezers have you raised in your life?  If you haven't built monuments...where would be good places to build them now to remind you of God's help in your life?  What lessons would God have you take from the past to propel you into the future?

Dear Heavenly Father, I thank you for all the times, even when I've been unfaithful, you have remained faithful.  Thank you for the times that I called upon you and you heard my cry and you rescued me.  Even when I couldn't "feel" you, you were always there right beside me.  I praise you for being my everlasting help in times of trouble.  For all the times I've overlooked, I raise those Ebenezers now.  When the future scares me, let me look back and take confidence from all the monuments of your help in times of trouble and in times or prosperity.  You are truly faithful and let your faithfulness be my hope.  In Jesus' name I pray.  Amen. 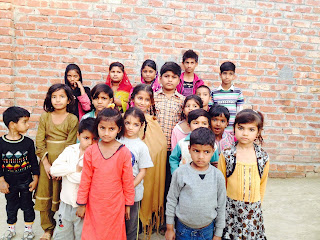 Click HERE to go to the website
Even if you can't sponsor a child yourself would you consider a partial sponsorship?
Thank you...