Can Christians Truly Have Mental Illness? A Personal Profile

This is a rather lengthy and very personal post, but several things have happened this past week that have convinced me that I need to speak up on this subject.  Here is one thing that was posted on Facebook and Instagram: 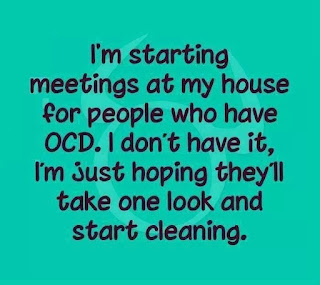 It was followed by some joking remarks and quite a few laughing emojis.  Now if someone cracked jokes about cancer, or heart disease, or MS, etc., people would be disgusted, yet mental illness is fair game and the stigma is far from being erased.  After all, "It's all in your head," right?  Obviously they don't know that OCD is considered one of the most insidious of the anxiety disorders.

A young man I know, has an agonizing obsession that loops around, and around, and around endlessly in his brain.  It says, "You're going to hell."  Compulsively, he is led to pray and read scripture continuously (for hours on end) as a way of warding this off from happening. The more he tries, the more anxious he becomes. Meanwhile, he knows somewhere, consciously, that this is irrational, but the obsessions present themselves as being VERY real and threatening, and he is helpless to make them stop.  That to me is hell....not a joke.

I hope you'll read my personal story and perhaps glean some information that previously you were unaware of.....maybe even read up on mental illness.  Chances are someone you know has such an illness!

I can vividly remember my dad asking me, "Are you still dwelling on that?" and then saying, "For Pete's sake give it a rest already."

When I would start a new job, even a simple job like working in a fast food place, I would get so anxious that I would literally get sick.  I was sure I was going to screw up.

I intrinsically knew I looked at the world differently.  I didn't have as carefree an attitude that others seemed to have.  I was plagued with self-doubt and was certain that anyone else, if placed in my shoes, would do a better job at managing life than I did.

Fast forward to my first child being born.  I couldn't wait for his/her arrival.  I loved this baby and was anticipating its coming...until she came, and a dark cloud blew in and settled over me.  Another friend, who gave birth around the same time I did, seemed to be enjoying motherhood.  I was a nervous wreck.  I had terrible thoughts like I wanted to give the baby back because I didn't like how I was feeling.  I wasn't the glowing happy mom that doted on this precious child the way others did.  Even writing this now, I feel horrid, ashamed, and embarrassed.  It's hard to think about, let alone write about it.
I couldn't sleep even when my daughter slept.  I obsessively wrote down and tracked everything she did and when.  I couldn't go to bed at night without putting my hand on her chest and feeling her chest rise and fall.  I'd kiss her and exit the room, only to return seconds later to see if she was still breathing.  This process of checking her breathing, going back and forth, could last for hours. I feared she might die if I left her alone and didn't keep checking.

I sank deeper into a sadness and despair at what my life had become and felt guilt and shame for not being more grateful for this gift that God had given me.  I would walk around the neighborhood in the wee hours when I couldn't sleep and one time I remember just running.  I was running and crying, and I didn't know where I was running to, but I just wanted to run away.  I remember driving by myself and thinking I just wanted to turn and head into oncoming traffic so that someone would hit me and put me out of my misery.  What on earth was wrong with me?

I finally confided in my family doctor who said I was experiencing post-partum depression and as long as I didn't feel like I'd hurt the baby (which I didn't) that I should just give it time and it would pass.  It was the "baby blues" and it was not unusual and given time I'd feel like myself again.

The trouble was that I didn't feel like myself again.  I felt somewhat better, but I knew that I just didn't feel like I should. I loved and adored my daughter, but something bigger, greater, was wrong.

It wasn't until around my daughter's third birthday and potty training just about pushed me over the edge, that I was thankfully and mercifully diagnosed as having OCD (an anxiety disorder) and depression (a chemical imbalance in the brain).

I started taking medicine (albeit with great hesitation) that worked on both the OCD anxiety and the depression.  It took a while, but I began to feel like I could cope.  I wasn't as anxious about things - especially taking care of my daughter.  I didn't have that feeling like if someone said to me, "Could you pour me a bowl of cereal?"  It sounded like they were saying "Go climb Mt. Everest.”  I began to feel joy return.

I didn't like taking the medicine, however, because that meant I had to admit I had a mental illness.  Well-meaning people told me that if I just read more scripture, or prayed harder, or had more faith then I wouldn't feel this way, nor would I need to take medicine.  I was a Christian, after all, and medicine was a crutch.

I felt flawed, less than, like my faith wasn't enough.  Surely, if I was just a better Christian I wouldn't be in this state.

These are the thoughts I wrestled with.  I remember going to a new dentist and having to check off medical history.  I would get to the part where it would list anxiety, depression, or mental illness and I’d have to check the little box.

Fast forward many years and I now realize that Mental Illness is, just that, an illness!  It can be caused by a chemical imbalance in the brain or by extreme circumstances (like what many of our returning vets experience).  Sometimes it's a combination of chemistry and experience. It's also genetic.  Many people self-medicate with alcohol, drugs, etc.

The truth is, it's not my fault.  It's not your fault.  You have an illness.

If someone had diabetes, you wouldn't tell them they didn't need insulin, but just needed to pull themselves up by their bootstraps, think happy thoughts, mind over matter and they'd be fine.  Perhaps reading more scripture would alleviate the diabetic symptoms?  Sounds silly, right? But this is how we treat the mentally ill.

I am a cancer survivor.  Cancer, though terribly scary, was something I could wear like a badge of honor that I battled and survived.  No one talks about battling/surviving mental illness in these terms.  When I hear about someone committing suicide and others saying things like, "How could he or she be so selfish to do something like that?"  All I can say is that unless you've lived the pain and suffering of depression or anxiety or intense fear or all other symptoms of mental illness like mania, or rages wherein you feel like a monster, or multiple personalities, you have absolutely no idea the pain and suffering that a person endures.  It is so bad, and if left untreated, I can understand that a person could get to a point that they are in so much pain, that ending one's life is the only way to make this horrid, unbearable pain stop.

Mental illness is no respecter of persons.

Most people would not peg me as the poster child for mental illness.  I was the captain of my cheerleading squad.  I graduated 8th in my class of nearly 800 students in high school.  I excelled in college.  I held leadership positions and have worked in Christian ministry most of my adult like.  I love to write and have been published.

Mentally ill?  No, those are the homeless people begging for money on street corners, right?

I am the face of mental illness.  I know what it's like to wear the gray glasses and have the dark cloud come in and settle over you.  I know pulling the covers over my head and not being able to get out of bed for days at a time.  I know pain so intense that all I can do is let the Holy Spirit groan, "Jesus" on my behalf.

I needed and still need medicine and counseling - hand in hand - to get me to, and keep me in, a healthy place. It's still not a cure.  I have my episodes with OCD and depression, but I am able to function and cope in this world. I can experience joy and can find hope in scripture.

I've learned that stress, and lack of sleep and exercise, and poor diet can all contribute to a greater likelihood of returning symptoms.  I know coping techniques like distracting and holding the lies I hear in my head (from the enemy) up to scripture and if they don't match up with scripture, then I need to take those thoughts captive to Christ and let Him cast them far from me.  I can call on my faith now, because I was able, thanks to medicine and prayer, to get to the field.

Mental illness is the thorn in my side (like what Paul experienced).  The Lord has not removed it, but I have learned that in it - as in all trials - His grace is sufficient.  He has never left nor forsaken me and He has been faithful to walk with me THROUGH the valleys and has not left me stuck there indefinitely.

I believe that I have a compassion for others that I would NEVER have had it not been for what I have dealt with and continue to deal with.  I would NEVER have the close relationship that I do with Jesus had I not had to call out to Him from the utter depths of despair and to know He was still holding onto me even when I couldn't hold on to Him.

So why do I say all this?  Two reasons.  One is to let the world know that God is faithful.  He knows the pain of the mentally ill and is close to the brokenhearted that deal with this illness.

Second, I would like to erase the stigma of mental illness.  One day, perhaps NFL teams will wear bright lime green cleats, gloves, and mouth guards to bring awareness to the one in four people who suffer from mental illness…including Christians. 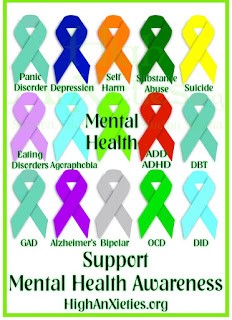 One day we might talk with ease about bipolar, panic attacks, anorexia, OCD, depression, schizophrenia, etc.
I strongly encourage you that if you have felt or experienced any of the symptoms I've mentioned, that you PLEASE seek medical advice and counseling.  There IS help and there IS hope!!  We just need to talk more about it.  Take it from one who's been there.
I waited patiently for the Lord; he turned to me and heard my cry.  He lifted me out of the slimy pit, out of the mud and mire; he set my feet on a rock and gave me a firm place to stand.  He put a new song in my mouth, a hymn of praise to our God. Many will see and fear the Lord and put their trust in him. (Psalm 40:1-3)
Thank you for reading.... maybe you know someone who needs to read this...be blessed....

Posted by Bev Rihtarchik - Walking Well With God at October 08, 2018 No comments: