Do You Feel Stuck?

U2 tickets in hand, we filed into the outdoor stadium.  My teenage son, the drummer, and his older sister loved this band.  You could feel the electricity in the crowd.

I had hoped to sit next to my kids, but they eagerly led the way into our seats, followed by my husband, followed by me.  It was hard to talk around my husband in order to tap into my own U2 fans' exuberance.  I wanted to embrace this family moment, but once again, I was literally and figuratively on the outside looking in.

My husband's back was to me most of the concert and hardly a word was spoken.  When the stage lighting went dark, and you could sense the climax of the concert crescendoing, cell phone flashlights and lighters lit up the circular bowl of humanity. Silence punctuated by thousands of tiny twinkling lights lit up the stadium. 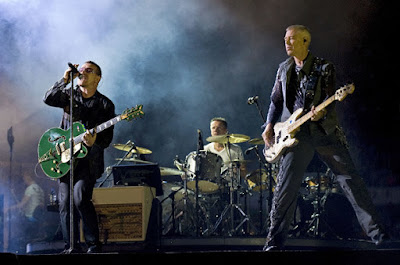 The setting was ethereal as Bono launched into their signature song, "I Still Haven't Found What I'm Looking For."  There, among 60,000 people, I never felt so alone in all my life.  No one saw the tears running down my cheeks as I sang and asked God, "Why haven't I found what I'm looking for...someone (my husband) to really love me?"

For many years, I had felt stuck in a loveless and often toxic marriage. I wondered if just being alone would have been better than being in a marriage and feeling this loneliness?  I wondered if God had forgotten me?  Despair, disbelief, and disillusion had settled in like a wet blanket over my life.

Within a few months time, my husband was gone.  He up and left.

I have found, driving down this highway called life, that the road is often laiden with potholes, filled with scattered debris, covered in snow, or clogged with angry drivers that cause me/us to sway, swerve, and sometimes we end up stuck in a ditch on the left side of the road. 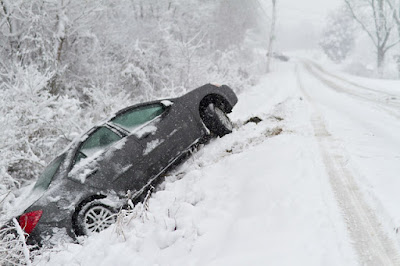 This ditch we find ourselves stuck in can be called "Sin."  It's a "stuck" of our own making.  What's needed is God's correction and repentance is key. Asking, "Father, forgive me," can unleash His mighty power.

But perhaps you've swerved off into the culvert on the right.

This valley you find yourself stuck in can be called "Disbelief" - it's often linked with doubt and despair.  What's needed is God's encouragement.  Also needed is the encouragement and support of fellow believers. Now is not the time to go it alone.

Or maybe, you're still on the road, but you're "stuck" in a traffic jam.

This is the path and stuck of "Stagnation."  There's no forward movement or progress.  Apathy and restlessness can accompany this form of "stuck."  You wonder if God's moving, even if you're not?

Do you feel stuck in the struggle?  Are you wrestling with sin or in doubt and  disbelief that the struggle will never end?  Does your faith life feel stale, stagnant, and like you're standing still?  If so you are NOT alone.

These verses from Psalm 40: 1-3 have become my life verse.  You see, I've experienced many "seasons of stuck" and God has been faithful to never leave nor forsake me.  He is truly, the God who stays.

I waited patiently for the Lord;
he turned to me and heard my cry.
He lifted me out of the slimy pit,
out of the muck and mire;
he set my feet on a rock
and gave me a firm place to stand.
He put a new song in my mouth,
a hymn of praise to our God.
Many will see and fear (be in awe of) the Lord
and put their trust in him. 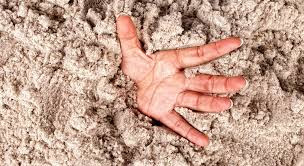 In upcoming weeks, I want to delve deeper into the phenomenon of being "stuck." The goal is to become "un-stuck." Would you dare to be vulnerable and share where and with what you are feeling stuck?  What are you feeling?  Questioning? Do you wonder if God's moving even if you're not?

If you've managed to get "un-stuck," would you share what helped you the most?  I want to be able to address the deepest needs.  Thank you in advance for sharing in the Comments or email me:  bevritter413@gmail.com.  I'd be honored to pray for you!

BE SURE to look for the CONFIRMATION EMAIL that will arrive in your in inbox.  Click on the link provided to confirm your subscription.  Thanks for reading...

Posted by Bev Rihtarchik - Walking Well With God at February 17, 2020 No comments: