Dare To Sing A New Song

My birthday dawned and the clouds, like dark grey battleships, moved swiftly across the ominous sky.  The trees bent and swayed with each strong gust of wind.  Just as I pondered not wimping out on my morning walk, the rain started pelting the glass of the storm door then ran downward like tears.

The COVID-19, quarantine birthday - you couldn't have scripted it any better.  All that was missing was some ominous, sad, creepy music and it would have captured my mood perfectly.

Perhaps it's still the little girl in me that looks forward to my birthday.  Who doesn't like being "Queen for a Day?" But this birthday?  It wasn't looking too promising.  The one highlight I had planned was skyping with my birthday twin late morning, but the rest of the day was one big blank space on my calendar.

That was until my husband called up the stairs. He beckoned me to come down. Hair in a ponytail, tie-dyed shirt and yoga pants, I was a vision of loveliness as I bounced down the stairs.

Tripping over the pile of shoes in front of the door, I managed to scramble into some leopard print crocs.  The ensemble was complete.  He opened the garage door and unlike the commercials, there wasn't a shiny new Lexus with a bow on top in the driveway.

"What do you want to show me," I queried with skepticism.

"You'll just have to wait," he encouraged as he fiddled with the camera on his phone.  Thankfully the rain had let up though the skies were still grey and there was a chill in the wind.

Then I heard it...car horns up the street started honking in an exuberant cacophony.  My husband scooted me out to the curb.  Just then the first car rounded the bend and a caravan of cars followed.  Some had streamers, others balloons.  Colorful birthday greetings covered the windows and doors.  Even a friend's dog had her head out the window - thrilled to be part of this crazy parade. 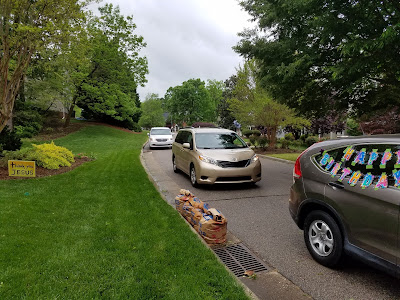 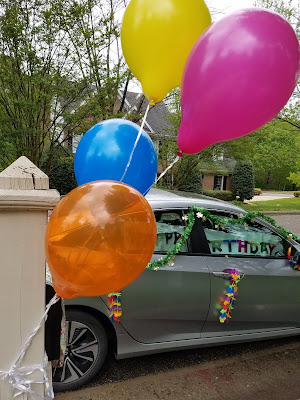 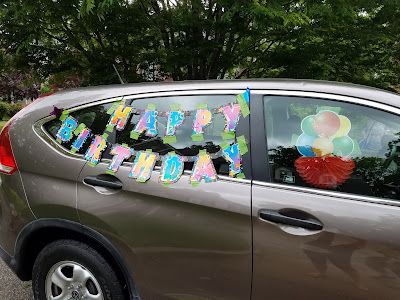 Maybe it's the HSP (highly sensitive person) gene in me, but the crocodile tears welled up to the surface.  I was so touched by these friends putting together a parade in my honor.  The parade, however, wasn't the finale, but just the beginning. 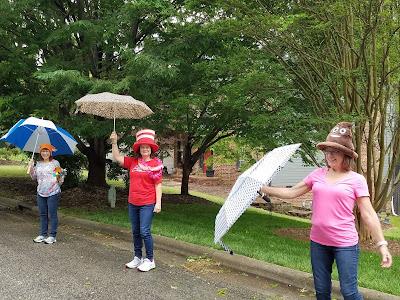 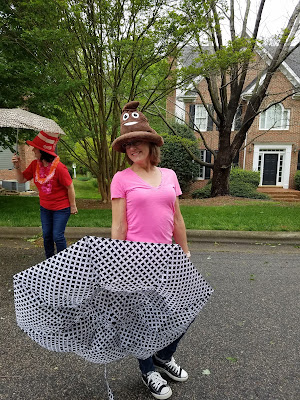 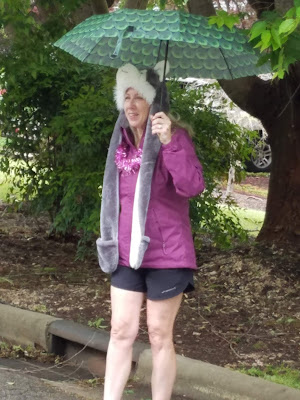 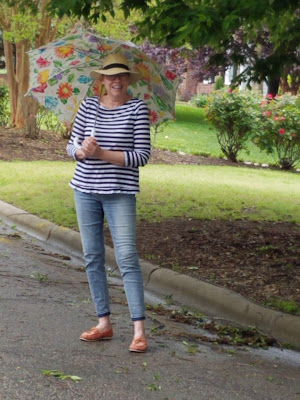 Like circus clowns piling out of their cars, the ladies popped out with crazy hats, leis, feather boas, and pretty parasols.  In true rockette style, they danced, twirled, and managed to sing Happy Birthday somewhat in unison.  It was hilariously funny and delightfully sublime at the same time.  I think they had nearly as much fun as I did because this circus had given them permission to get the heck outta the house!

I've never had a parade in my honor...and I probably will never have one again, but thanks to this crazy, strange, scary, surreal, uncertain parallel universe we'd been thrust into, a birthday parade just seemed like the fitting thing to do.

Friends and family bombarded me with texts, and Facebook messages, and phone calls.  It was as if they needed to shower me with love as much as I needed to be showered.  Terrifying times made for a powerful out-pouring.

The song in my heart, that had been playing over the last several weeks, sounded more like a funeral dirge.  Yes, people had been dying and people had lost their jobs and livelihood.  The news was oppressive and the uncertainty had exhausted us. We had blamed, hated, pointed fingers, made slurs, and hoarded toilet paper.  It hadn't been pretty.

Perhaps, that day my friends dared to sing a different song and I needed the serenade.  The one thing that coronavirus couldn't quash was people's need to show and receive love.  This virus has taken some of us back to basics...back to the bible...back to the greatest commandment..."Love one another!"

There's been a certain urgency to tell others that we love them and to show it.  Perhaps that's what led me to pull out an old cd and play this song at the end of the day.  I was thankful that my friends had dared to sing a new song - even with what was going on in the world.

This song by James Taylor isn't a great hymn of faith, but it was an anthem for my birthday.  I'll leave you with this video and the words of the song.  If the news is too depressing, maybe you'll find yourself humming along...shower the people you love with love...show them the way that you feel.  Things are gonna work out fine if you only will....

"You are my hiding place; you will protect me from trouble and surround me with songs of deliverance."  (Psalm 32:7)

Be blessed...and dare to sing a new song...how can you add to the chorus...will you share?

ps.  If you've been encouraged by what you read today, why not SUBSCRIBE and get my weekly posts (and nothing else)?!  Just go to the SUBSCRIBE tab above, enter your contact information, and then be sure to check your email INBOX FOR A CONFIRMATION LINK which you will need to click on to complete your subscription.  Thanks for reading!
Posted by Bev Rihtarchik - Walking Well With God at April 17, 2020 No comments: