I remember a time that I was going through the check out line at the grocery store with my son and daughter when they were young.  My son sat perched in the front of the cart while my daughter hung on the side.  The young man bagging the groceries snagged the gallon of milk and slapped a little orange sticker that said "Paid" on the jug of milk and shoved it under the cart.

My daughter, into reading everything at this point, asked me, "Mommy, what does this say?"

"That says 'Paid',"  I told her while fiddling through my purse in order to pay the cashier.

"Well why did he put this sticker on the milk?" she asked with typical childhood curiosity.

"That tells people that I paid for that jug of milk," I said - still somewhat distracted.

Leave it to my daughter to pull the sticker off the jug of milk.  Then she tugged on my arm until I bent down to her level.

"Here ya go Mommy," she said, as she proudly stuck the orange sticker on my forehead, "you've been paid for!"

Out of the mouths of babes such truth will come...

That was quite a few years ago.  Little did I know, at that point, that in a few years, my husband would walk out the door and abandon me and in the process leave our children in the wake.  I knew and experienced the sacrifices that go into being a single mom.  These women are heroes in my book.

My husband and I reconciled about a year later. Ten years later, he left again.  Abandoned not once...but twice.  It felt like I had the word "unworthy" seared upon my forehead.  Separation and divorce do nothing for one's self esteem.  I thought I was about as low as a person could go...

That was until the day I lost my job.  Enrollment in the school was down and one of the classes had to be cut and...well...you guessed it - it was mine.  I needed that income, meager as it was.  Now what was I going to do?

I came home and sobbed.  I tried calling my mom, my close friends and family members.  I couldn't get anyone.  I went online and was hoping there would be a friend available that I could talk to.  I desperately needed the reassurance that I, indeed, had value.  I was struggling to find any.

My friend, Dave, from high school was the only friend online.  I hadn't talked to him in thirty plus years.  We had exchanged pleasantries on Facebook - "cute dog" was the last thing I had written.  But, that day, God prompted me in an uncustomary way to reach out and say, "Hey".  That was it..."Hey".  That was all I could muster.

That one word prompted more written conversation and spoken conversation, then reuniting in person.  The pictures below show us celebrating the anniversary of "Hey Day" (June 2nd) and celebrating over two years of marriage.

Though I was originally redeemed- "paid for"- by the blood of Christ, that day I felt like God had purchased back something of value that had been lost - me.  I felt like once again I had that orange sticker placed on my forehead that said to the world...I am loved and I have been paid for. Someone saw value in a daughter who was of great, great value to God.

God can redeem anyone in any situation.  Nothing is beyond Him.  He is ABLE!  How have you seen His redeeming love worked out in your life? How do you hang onto God's love when others deem you unlovable?  I would love if you would share?! 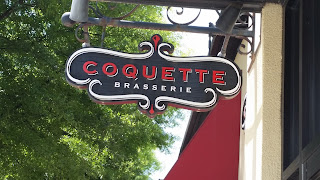 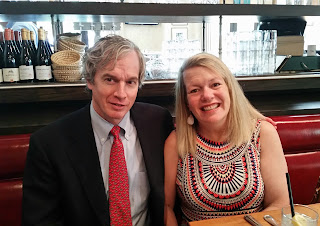 Dear Heavenly Father, Thank you that through the blood of Jesus Christ,  I have been bought and paid for.  Help me not to find my worth in who others say that I am, but to truly know that I am your precious daughter because YOU have claimed me - you have paid the ransom.  I praise you for your faithfulness through good times and bad.  Thank you for your ever lasting arms you've held under me so that I would never fall.  May I be sure to always tell of the good things that you are accomplishing THROUGH me.  May your name be glorified!!  In Jesus name I pray, Amen.

ps. Next week I'll be blog hopping over to Holly Barrett's place.  I will provide links to her wonderful blog, "Reclaiming a Redeemed Life" as well as to her podcast on which I will be her guest.

If you'd like to know the story behind how a middle-aged homemaker from NC came to be championing a Christian school in Pakistan, you may want to tune in.  Holly and I will be chatting about my blog, the foundation, the good works that God is up to, and ultimately about how we can reclaim a redeemed life.

I know you'll love Holly - a native North Carolinian - who is hard at work furthering God's Kingdom.  See you then...