What Would I Do (WWID)

We've all seen or worn the bracelets (WWJD) What Would Jesus Do?  Thanks to my pastor, I've really been pondering the question What would I do? (WWID) He read to us a familiar passage of scripture.  I invite you to read it with me again and then we'll jump off from there.

A Woman Caught in Adultery

8 Jesus returned to the Mount of Olives, 2 but early the next morning he was back again at the Temple. A crowd soon gathered, and he sat down and taught them. 3 As he was speaking, the teachers of religious law and the Pharisees brought a woman who had been caught in the act of adultery. They put her in front of the crowd.
4 “Teacher,” they said to Jesus, “this woman was caught in the act of adultery. 5 The law of Moses says to stone her. What do you say?”
6 They were trying to trap him into saying something they could use against him, but Jesus stooped down and wrote in the dust with his finger. 7 They kept demanding an answer, so he stood up again and said, “All right, but let the one who has never sinned throw the first stone!” 8 Then he stooped down again and wrote in the dust.
9 When the accusers heard this, they slipped away one by one, beginning with the oldest, until only Jesus was left in the middle of the crowd with the woman. 10 Then Jesus stood up again and said to the woman, “Where are your accusers? Didn’t even one of them condemn you?”
11 “No, Lord,” she said.
And Jesus said, “Neither do I. Go and sin no more.”   (END)
I have always focused on the part where Jesus instructs the crowd, "Let the one who has never sinned cast the first stone."
Immediately, I know I must drop my stone, because I am not without sin.
But, I am convicted. I am definitely guilty of practicing throwing stones.
I may not say it out loud, but I am guilty of judging.  I may not say it to someone's face, but I'll say it in my head.  Everything from, "Look at her shoes.  She's way too old to wear shoes like that.  She looks ridiculous."  Or, "I could never do something that rude.  Doesn't he have any manners?"
To the adulteress, I might say or think, "I could never break my wedding vows like that and dishonor God."  Maybe I wouldn't, but you see, I was brought up in a home where my parents were faithful to each other.  They were married for 56 years when my dad passed away.  They didn't have loud arguments in front of me. I grew up reading the Bible. I was brought up to have a healthy fear of my parents and God. (Maybe a little too much).
But What would I do if I had walked a mile, or a lifetime in the shoes of the woman caught in adultery?
What if my childhood was terrible.  What if my mother or father cheated on each other.  What if I made poor choices in men and then was passed from one bad man to the next like an old shoe. What if I was beaten? What then?
I'm not justifying her sin as we are all ultimately responsible for our own behavior, but what would I be capable of doing if I was her?  Hmmm....
What if I had been the victim of child abuse or domestic abuse?  How might that affect my behavior?  What if I was left a widow at an early age, how might that affect my temperament? What if I was cheated out of an inheritance? What words might come out of my mouth? What if I longed for love and a spouse or a baby and was denied? What if a drug dealer was on trial for dealing drugs to my child who overdosed.  Could I possibly pull a trigger?
The answer is:  I really don't know.  Does this justify sinful behavior?  Not at all, but putting myself in someone else's shoes, does make me wonder what I might do, how I might act, or even what I might be capable of. The truth is that hurt people, hurt people.
Asking myself this question helps to take me down off my high horse.
Asking this question equals the scales.  After all who is to say that my sin is less than someone else's sin?  And sin is sin after all.
Asking this question, makes me want to extend compassion, empathy, and understanding rather than picking up and throwing stones.
I need more practice at extending grace and mercy and less practice at throwing stones....whether verbally or in my head.
I love Jesus' last exchange in this passage: “Where are your accusers? Didn’t even one of them condemn you?”
11 “No, Lord,” she said.
And Jesus said, “Neither do I. Go and sin no more.”
No matter what our sin, when we turn it over to the Lord, He says loud and clear, "Neither do I condemn you."
This is where I shift to WWJD or WDJD (What Did Jesus Do?) He forgave...
What would I do if I walked in another's shoes and then what did Jesus do?....now what WILL I do?
What about you?  Do you ever find yourself practicing throwing stones?  What triggers this reaction?  What can we learn from this story?  Is God calling you to a greater understanding of others?  Is He calling you to not condemn them or yourself?


Dear Heavenly Father, Please forgive me for the times I have thrown stones either verbally or in my head.  Help me to first walk a mile in another man's (woman's) shoes before I even think of passing judgment.  Even if Your Word is on my side, let me think how Jesus would approach someone.  Let my words be filled with compassion, grace, and mercy.  Instead of throwing stones, let my words be a balm of grace to those who are hurting.  Let me not be quick to condemn....others or myself.  Let your grace be my grace.  In Jesus' name I pray, Amen.

AND THE WINNERS OF THE TWO COPIES OF "A MOMENT TO BREATHE" ARE:  Kimberly H. & Pearl A.  (winners will be notified) Congratulations!

Thank you ALL for your comments and for subscribing.  The book is on sale OCT. 3rd at all book retailers.  I hope you'll pick up a copy. 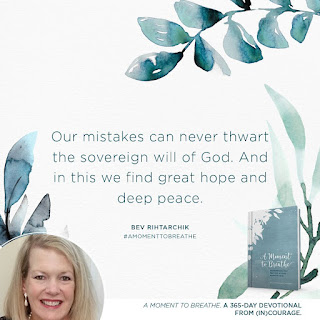 Posted by Bev Rihtarchik - Walking Well With God at October 02, 2017 No comments: